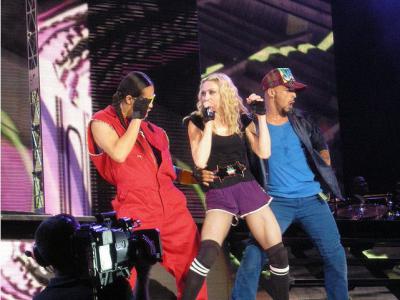 Madonna tickets for "The Celebration" Tour 2023.

Madonna is finally coming back on tour in 2023! As part of her "The Celebration" tour, the Queen of Pop will grace us with several concerts in Europe in November. A total of 46 cities in Europe and North America are on the schedule. Fans can expect a mix of tracks from the last forty years in the music business at the upcoming Madonna concerts. "Like A Virgin", "Material Girl", "Like A Prayer" or "Vogue" could be performed as well as newer songs from albums like "Hard Candy" and "Rebel Heart" or the current record "Madame X".

Get your Madonna tickets now at Ticketbande and experience the pop icon live on stage in 2023!

With over 350 million records sold worldwide, Madonna is the undisputed Queen of Pop. With "Like a Virgin", "Like a Prayer" or "Hung Up", Madonna catapulted herself into pop heaven. Hardly any other woman understands self-promotion as well as Madonna. With constant new interpretations of herself, she simply leaves any haters and enviers behind. For over three decades, Madonna has been one of the most important components of music culture and thus also one of the most influential women in the entire world. Not only fans are at the feet of the 65-year-old, even other stars adore the icon.
Fans can look forward to what the Queen of Pop has in store for us. What is certain is that Madonna is far from the end of her storybook career.